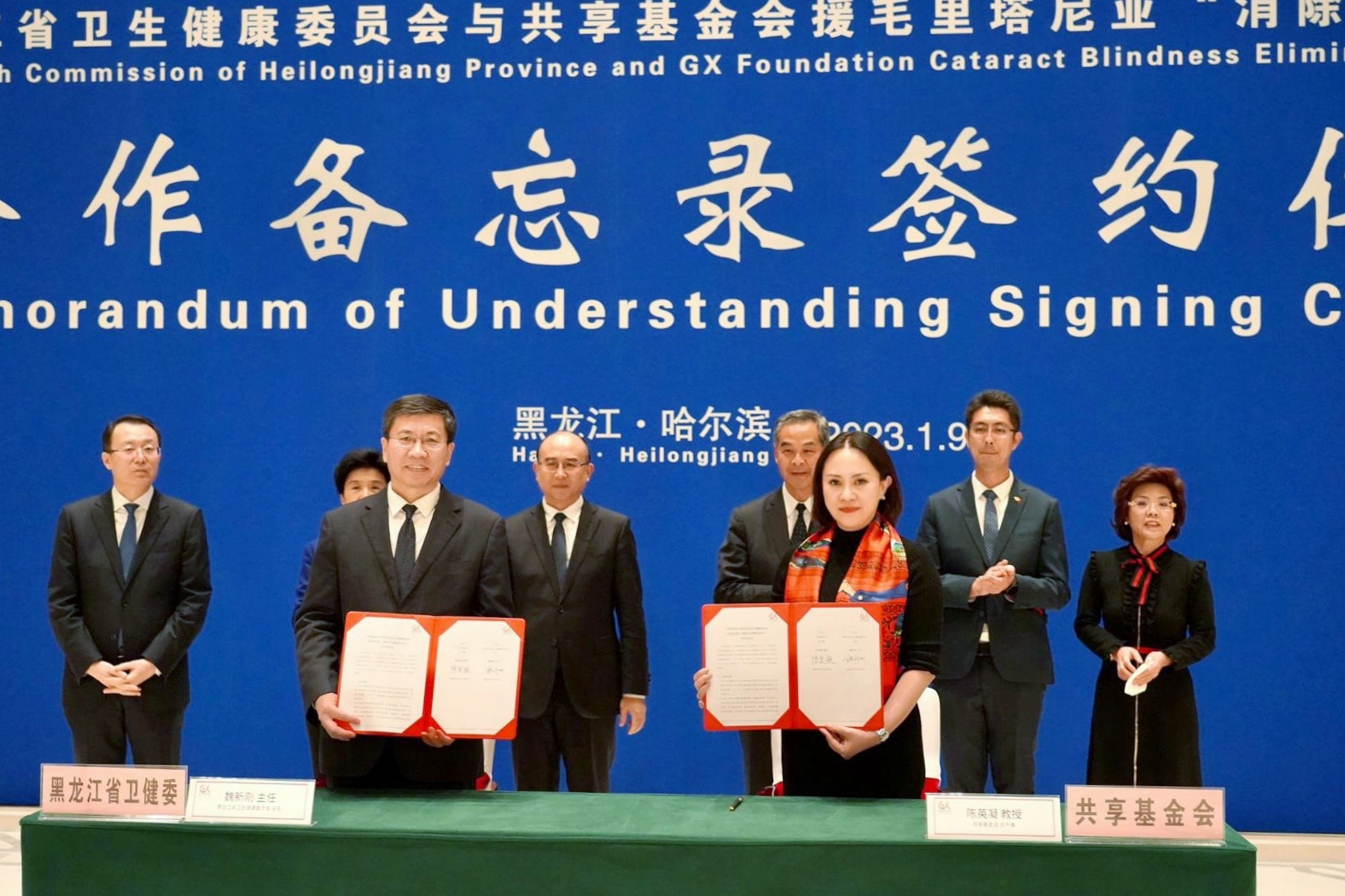 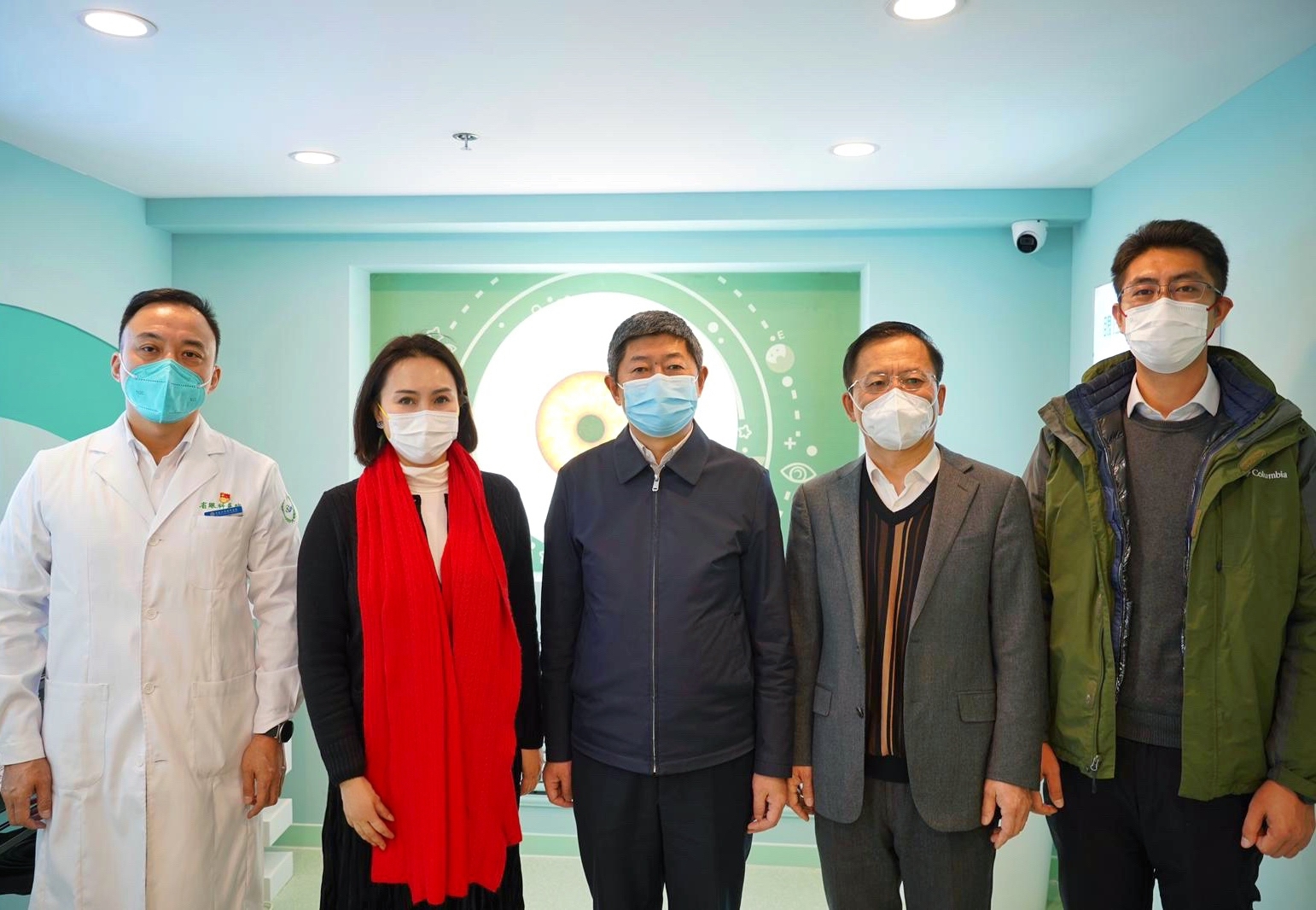 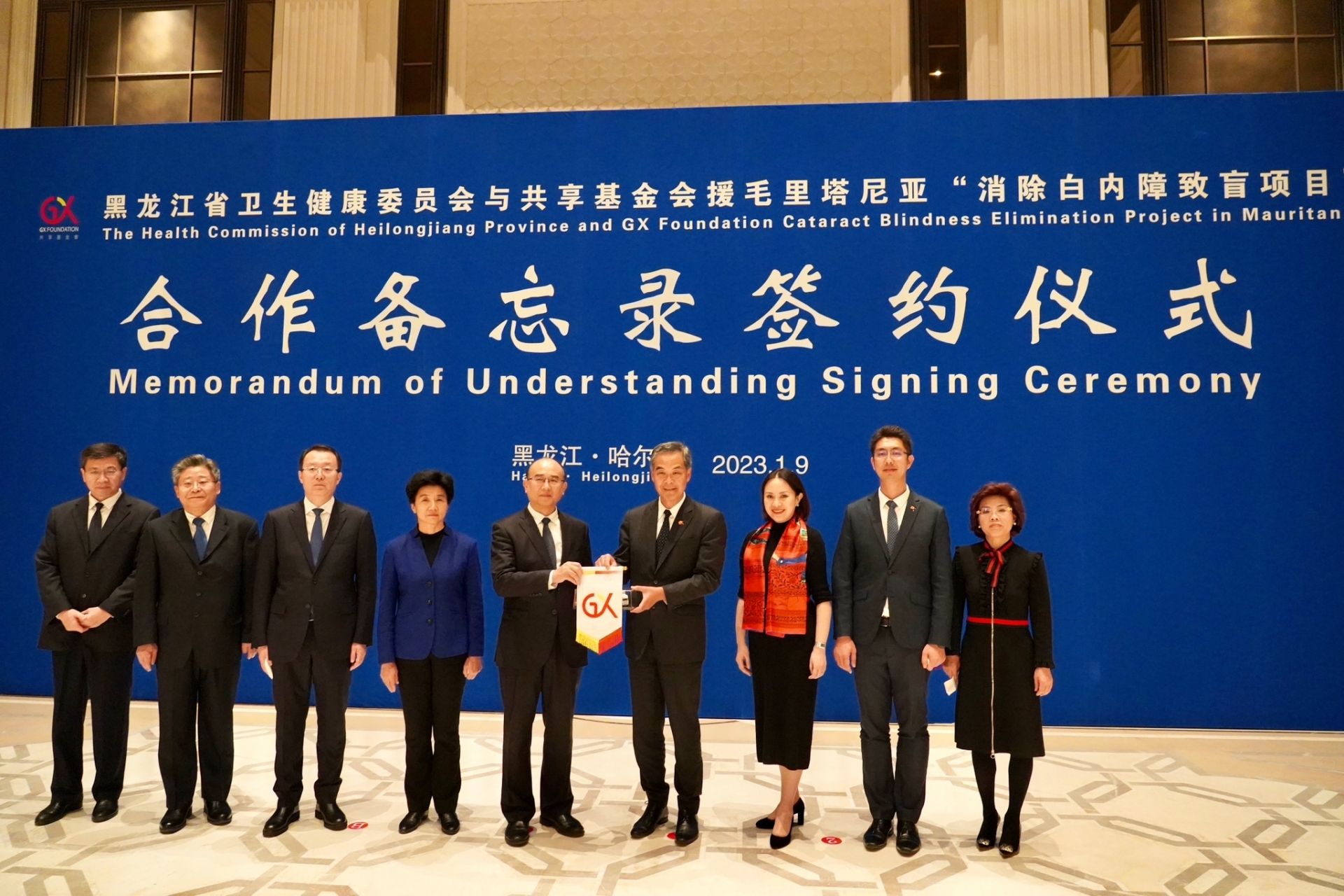 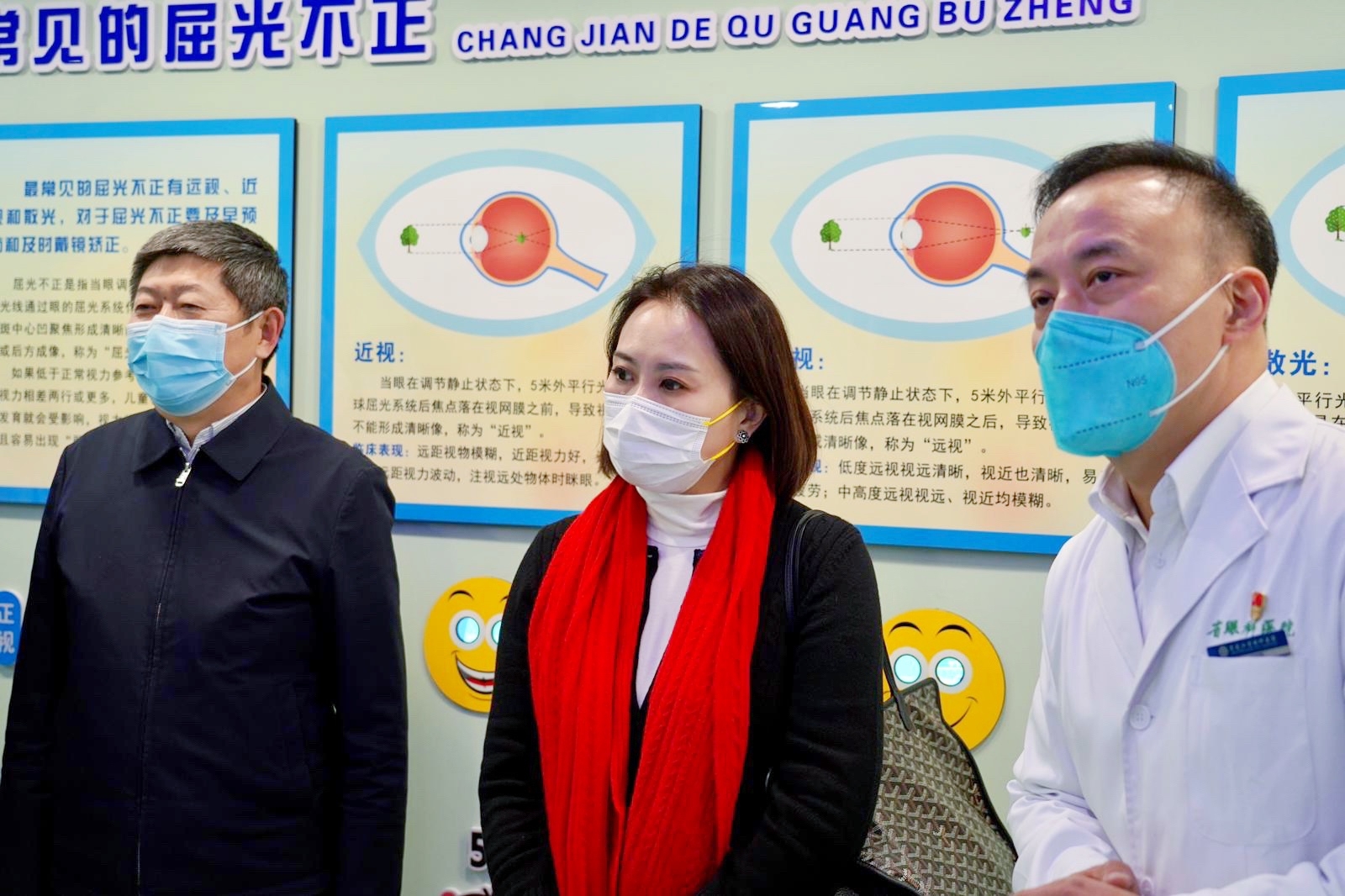 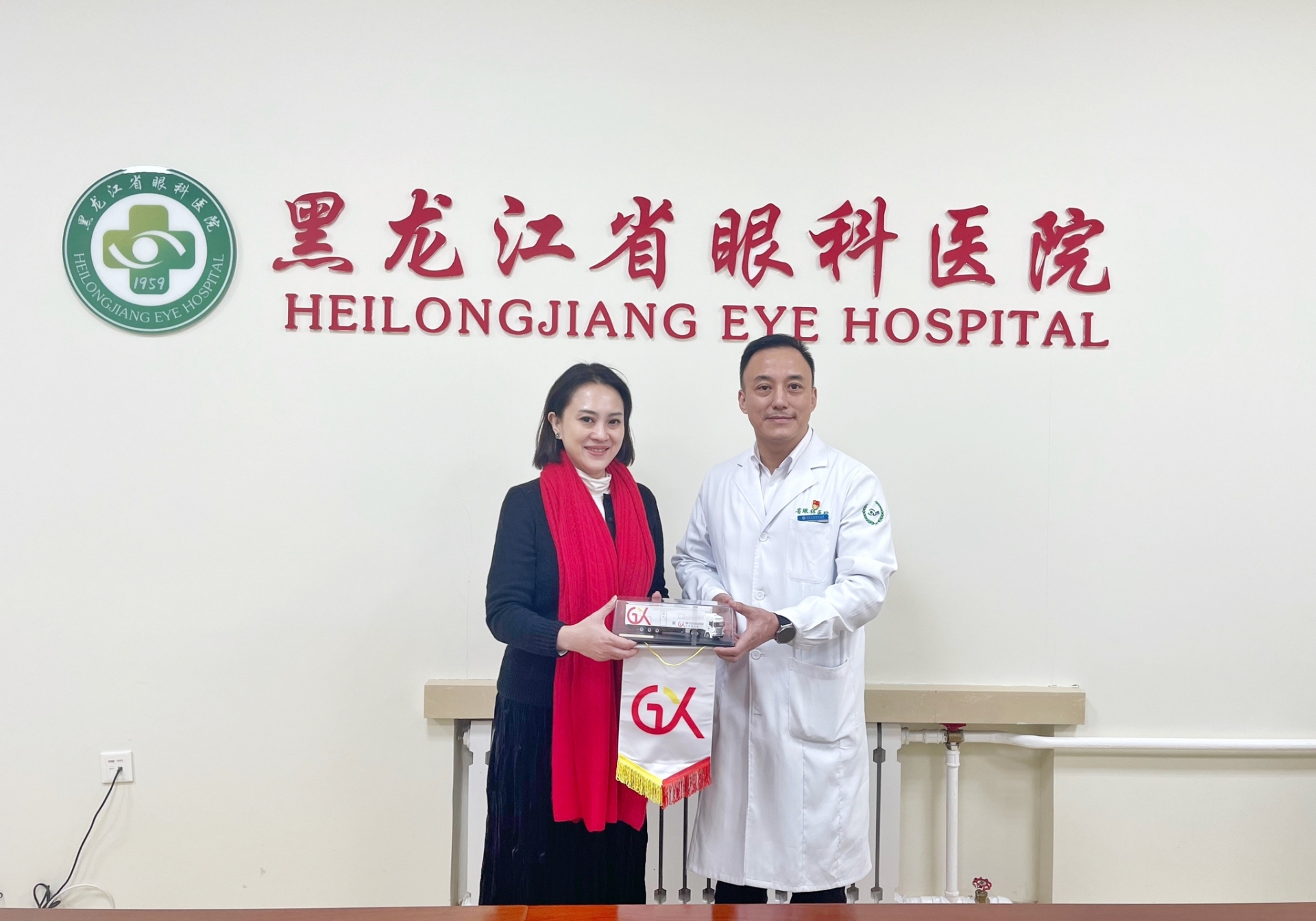 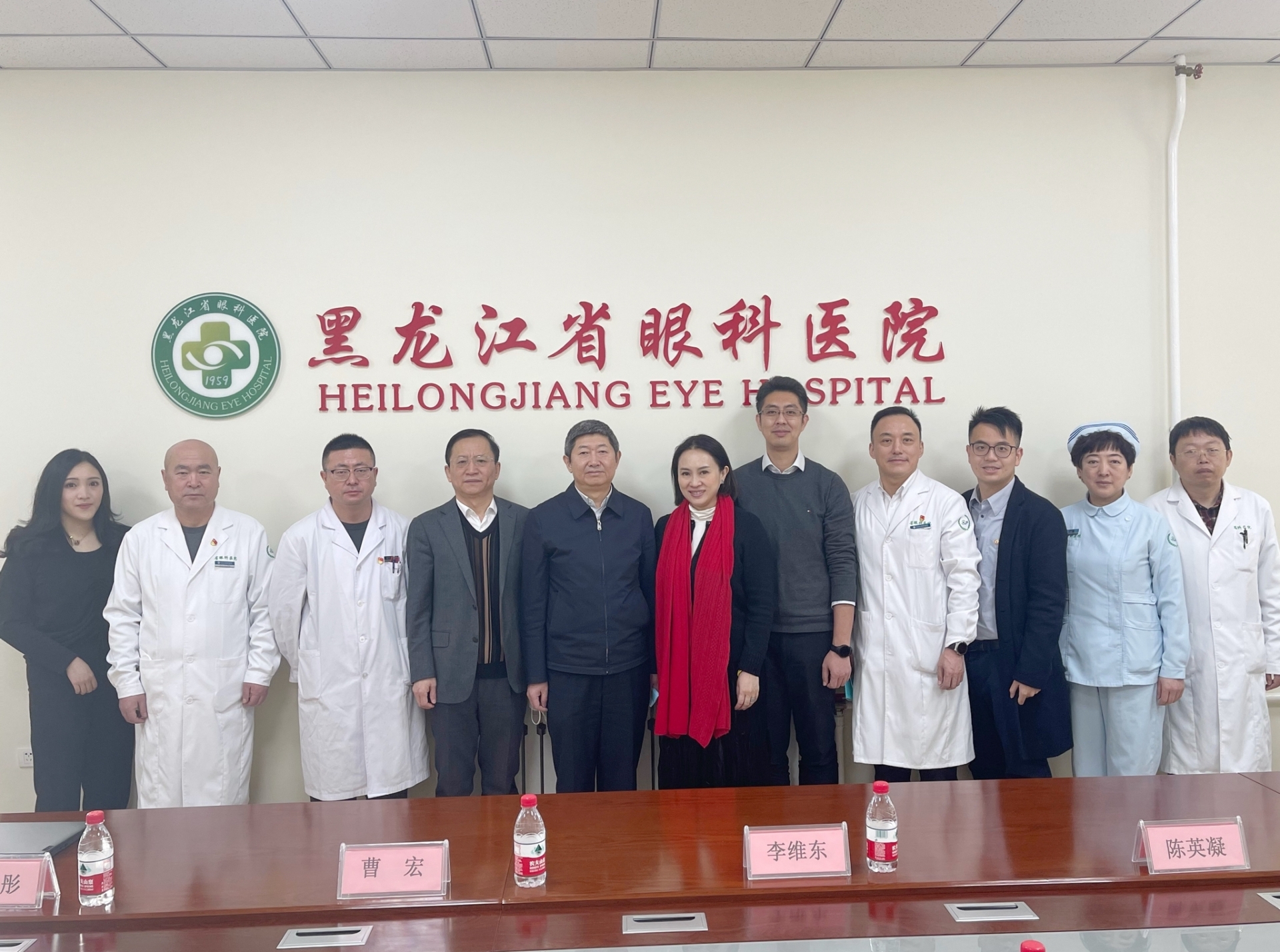 GX Foundation is committed to provide international medical and public health humanitarian assistance in the Belt and Road countries. After successfully launching the Cataract Blindness Elimination Project in Laos and Cambodia in 2022, GX Foundation and the Health Commission of Heilongjiang Province entered into a Memorandum of Understanding in Harbin on 9th January 2023, signed by GX Foundation CEO, Prof. Emily Chan Ying-yang and Director of the Health Commission of Heilongjiang, Mr. Wei Xingang. Under the MOU, expert medical professionals from Heilongjiang will travel to Mauritania to provide approximately 3,000 quality cataract surgeries free of charge to local populations in 18 months, restoring the sight of those in need. The ceremony was witnessed by Vice Chairman of the National Committee of the CPPCC and GX Foundation Chairman, Mr. Leung Chun-ying and Secretary of Heilongjiang Provincial Committee of the CPC, Mr. Xu Qin , as well as representatives of GX Foundation, the provincial government, and the Health Commission.

Mark a new era of the cooperation between Heilongjiang and HKSAR

In December 2022, GX Foundation signed a MOU with the Ministry of Health of Mauritania, marking the kick-off of the collaboration in eliminating the backlog of cataract cases in Nouakchott of Mauritania in the coming year. GX Foundation will send one Mobile Eye Treatment Centre (METC) to provide free surgeries to approximately 3,000 patients in the region. In delivering the opening speech of the MOU signing ceremony , Mr Leung Chun-ying said, “The Memorandum of Understanding signed today not only marks a new era of the cooperation between Heilongjiang and HKSAR in aiding Mauritania, but also signifies a new format of cooperation between the mainland and Hong Kong.” On behalf of the GX Foundation, he also expressed his gratitude to the Heilongjiang Health Commission and the Provincial Government, the Provincial Political Consultative Conference, the Provincial Health Commission and other supporters for their profound support to GX Foundation. He believes that this collaboration can further promote the friendship between China and Africa. He also wishes to visit medical team in Mauritania again as soon as possible.

China and Africa have a long history of exchange. As pointed out by President Xi, China and African countries are champions in adversity. Since China sent the first batch of medical aid teams to Africa in 1963, generations of Chinese medical personnel have made selfless dedication in Africa which manifested the spirit of boundless love of the Chinese people.

Sending off more than 800 medical specialists to Mauritania, Heilongjiang has been providing medical assistance to Mauritania since 1968. Visited the medical team of Heilongjiang in Mauritania three months ago, Mr Leung learnt their superb medical skills which have been unanimously recognised by the local government and people and realised their lofty dedication has contributed to the enduring friendship between China and Mauritania.

GX Foundation CEO Prof. Emily Chan Ying-yang and the representatives of the Health Commission of Heilongjiang Province visited medical professionals in the Heilongjiang Provincial Eye Hospital. “After the border reopening of Hong Kong and mainland China, our team immediately enters mainland China to coordinate with different parties to accelerate the project progress with an aim to help people in need to regain vision as soon as possible,” Professor Chan said.